The demo includes a PHYTEC phyBOARD-i.MX 7 Single Board Computer which uses a phyCORE-i.MX 7 System on Module as the central processing module, a basic 6-axis robotic arm, a small MIPI CSI-2 camera, and a basic motor controller Raspberry PI HAT for controlling the motors.

The phyCORE-i.MX 7 System on Module is running Linux and an OpenEmbedded distribution that has been built with Yocto. Greengrass and other dependencies are built into the image and PHYTEC has pre-loaded its Greengrass certificates onto the file system. Once the system has booted it connects to the internet via ethernet (WiFi could be used instead) and the device can then be controlled via the Amazon AWS IoT console.

PHYTEC created a custom classification Lambda Function that utilizes the camera, ApacheMXnet, ImageNet, and Python libraries for controlling the robot arm that will place a detected lime or lemon into the appropriate container. This Lambda function can be updated, improved upon, and pushed out to any Greengrass Core device in the users AWS IoT console and Greengrass groupings.

The intent of the demonstration is to show that Amazon’s Greengrass and Machine Learning frameworks can be utilized on low-power and low-cost edge devices to perform autonomous tasks without the latency of relying on cloud-based computation to make decisions; decisions are made in real-time at the edge. In addition, these ‘programs’ at the edge can be updated with smarter models using the Amazon AWS IoT Console. Combining this update mechanism with new technologies such as Amazon SageMaker allows edge-based decision making while allowing for simple updating of better algorithms; the devices on the edge are no longer isolated hardware systems. These edge systems can now be software defined and can be updated with ever evolving models and research.

The actual Edge device is the PHYTEC phyBOARD-i.MX 7 single board computer (SBC). This SBC utilizes a PHYTEC phyCORE-i.MX 7 module that features the NXP i.MX 7 processor. This device runs Linux and includes support for the Greengrass framework as well as ApacheMXnet for running various inference models. The phyBOARD-i.MX 7 is also controlling the robotic arm via an off-the-shelf Raspberry PI motor controller HAT. PHYTEC has included a Raspberry Pi HAT connector on its development kit for ease of prototyping. You can see all of the connections from the phyBOARD-i.MX 7 SBC to the motors, ethernet, and camera sensor. The camera sensor is a small and very inexpensive MIPI CSI2 camera. More sophisticated cameras could be used depending on the application.

The demo boots up with a pre-deployed lambda function. This Lambda function was previously deployed to the device at PHYTEC’s lab. This Lambda Function is a package of code that includes the Greengrass SDK, licensing, and four Python files: 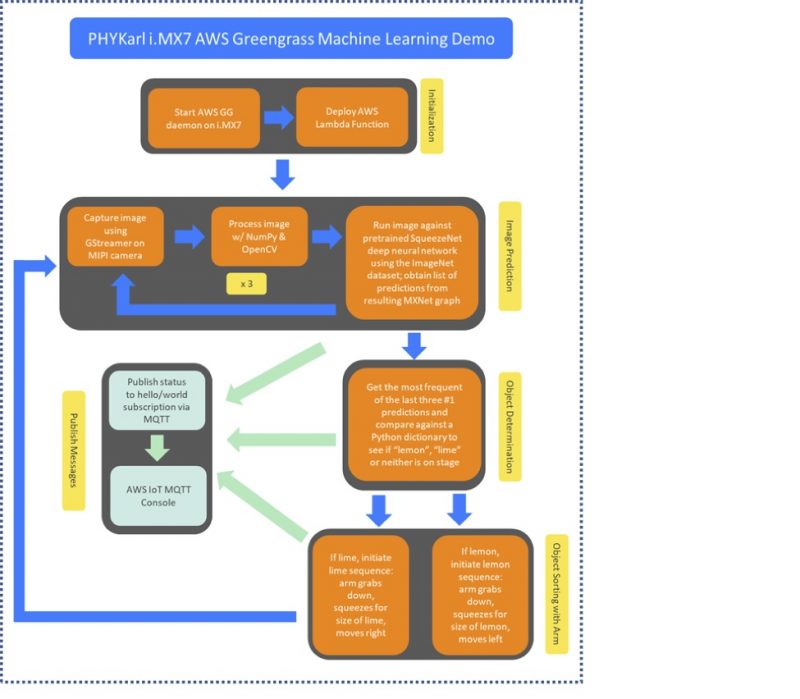